Tomorrow is June 11, which has been designated as the day that all animal shelters are asked to stop killing for 24 hours and look for other solutions. This is from the Just One Day Web site:

"We are asking animal shelters across the USA to take a pledge not to kill any savable animals on June 11, 2013. For Just One Day, "Euthanasia Technicians" will put down their syringes and pick up cameras. Instead of injecting animals with lethal doses of sodium pentobarbital, they will photograph them and post them on the Internet, on Facebook, on twitter. On June 11, 2013, they will market their animals to the public, they will reach out to rescue groups, they will host adoption events with discounted rates, they will stay open for extended hours, and they will ask their communities to help them empty the shelter the good way."

But Dallas Animal Services isn't participating. They never have. Can Jody Jones explain why?

I decided to visit the DallasCAP Facebook page to politely ask why - but after reading their "Rules of the Road", I realized that my post would last about 30 seconds.  I've copied and pasted the Rules below. My comments are in blue.

Rules of the Road - please read before posting.

We are creating a community plan.  To that end, please consider the following before posting:
Remember, no one individual or organization can tackle a problem of this magnitude. “No Kill may be defined by what happens to the animals within the halls of the shelter, but it can only be achieved by what happens outside of them.”  – Nathan Winograd, author and No Kill advocate*
Also, please note - months of research has been conducting up to this point, so while we appreciate the sentiment, general comments like "look at what Richmond did", keep in mind that we've already researched Austin, Richmond, San Antonio, San Francisco, and many, many more. (FP: Why they didn't replace this paragraph with the phrase "fuck off" is a mystery.)

* Although Nathan Winograd has literally written to the mayor of Dallas and asked that the quote be removed from all DAS-related materials - but as of today's date, it's still there.  Does anyone know who the author of this is? (Hint:  Winograd decisively ate her lunch on Facebook when discovering he'd been quoted in such fashion. She also likes to "like" postings that feature her on the DCAP Facebook page - a page she authors.)

Posted by Feline Provocateur at 11:08 PM No comments:

Texas Unites is back. Sorry.

I really don't know why anyone who genuinely cares about animal welfare pays to attend the Texas Unites conference. There's not a lot of uniting, if truth be told. I suppose it's another way to prove your self-worth if you've run out of options at home. And Austin is quite a pleasant place to escape the local St Patrick's Day Parade.

According to the conference brochure, you can play Bingo and schmooze with the other sycophants when you're not shelling out $200 for the Texas Unites workshops, plus up to $300 for your hotel room.  Add on a return flight on Southwest Airlines or a few tanks of gas, and you'll be out of pocket $800 to a grand if you're not careful.

Perhaps this wouldn't be such a wash if this year's Texas Unites wasn't so similar to the ones held in previous years. As usual, the HSUS - you know, those folks who are fine with Michael Vick owning a dog - is sending a few professional liars to Austin to drum up more retirement funds for their merry band of attorneys.  And there are the usual unemployed people who are jumping at the chance for a trip to Austin and an hour or two on a podium, pretending to be experts.  If you scroll through this year's brochure they're pretty easy to pick out.

Posted by Feline Provocateur at 9:28 PM No comments:

Bastrop director out, volunteers back

From the KXAN television Web site:

Volunteers allowed back in at Bastrop animal shelter
BASTROP, Texas (KXAN) - Things may be looking up for the troubled Bastrop County Animal Center.

On Friday, county commissioners accepted the resignation of director Diane Mollaghan, who received her second DWI arrest after a crash a week ago.

They also invited back some 40 volunteers who were banished a month ago for criticizing conditions at the shelter.

Click here to go to the KXAN Web site and the rest of the story, together with a video.

Posted by Feline Provocateur at 3:34 PM No comments:

Dumb and dumberer...and both in Texas

Ryan is a Texas attorney who helped make No-Kill a reality in Austin. He is also a winner of the No Kill Advocacy Center's Henry Bergh Leadership Award, and co-author of the Web site O is for Onward.

Texas is providing some early frontrunners for the 2013 Ingrid Newkirk Worst Person in the World Award:

In response to a citizen e-mail* urging the adoption of No Kill policies and programs, Arlington, Texas, Council Member Charlie Parker reportedly e-mailed back: "Are you seeing someone concerning your mental problems[?] . . . I'm done with you . . . [I]f you want a no kill shelter then move to Austin."

*Note: the citizen who emailed Parker and received his smarty-pants response is believed to be a volunteer with Friends of Arlington Animal Services - a group who works to save as many animals as possible from euthanasia. However, I have not seen this email so I am not naming the author here.

Not to be outdone, embattled Bastrop Animal Shelter Director Diane Mollaghan (photo below) was arrested on suspicion of driving while intoxicated on Friday when, after being pulled over for reckless driving, she put her Fiat into reverse and slammed into a police car. That would be just plain sad if she hadn't the same day implemented a new volunteer program application in which she required applicants to submit their medical and financial records. Which of course begs the question for Ms. Mollaghan: perhaps *criminal* records would have been more appropriate?

You can contact Arlington Council Member Charlie Parker at this e-mail address: Charlie.Parker@arlingtontx.gov

Note from FP: If you have any additional details regarding these two, feel free to leave a comment.
Posted by Feline Provocateur at 5:23 PM 1 comment:

Another PETA Kool-Aid drinker speaks out...and out... and out

I just received a link to a mind-numbingly long Facebook post by someone named Amanda Katz.  I'm not sure if this is her real name as she's taken pains to disguise her identity (although, if I'm able to unearth the real Amanda Katz, I'll say so):

I'm not sure how long this link will work, so click at your own risk.

My question to Amanda is:  If you have enough room online to publish your reams of opinion - plus those of Mary Lundberg, whoever she is - why did you omit Winograd's?

This is probably because Winograd makes a fool of them. You'll have to click on View More Comments to see his responses:


If you're still awake after plowing through her mega-post, you  may be amused to read that her sycophant subscribers are surprised that Winograd didn't delete her remarks.  (See Comments.) You know, like most other HSUS/PETA lemmings. For example, try to post something negative on any page maintained by the Dallas Companion Animal Project (DCAP). It'll be gone in minutes.

Want to be Amanda Katz's friend? Forget about it. Her Facebook page is set up so that you can only subscribe to her. You can't be her friend, but you can hear from her any time she wants to bang on about her intelligence and virtue.


Posted by Feline Provocateur at 10:48 PM No comments:

Since I haven't checked out the Dallas Companion Animal Project Web site lately, I decided to take a look today. But it was gone.  I replaced the .com with .org - still nothing. Perhaps it's a temporary situation.

Finally I went to Facebook to see if they were still maintaining a page. They are - sort of.

It seems that the task of patting themselves on the back has been transferred to Chris Watts and Maeleska Fletes, who describe themselves as "co-chairs", aka "co-sit on butts and talk a lots".   Here's a DCAP posting on Facebook from November 2012 - I have added some comments in parenthesis:

Since the Dallas Companion Animal Project was launched a year ago, we have had the mission of making Dallas one of the most progressive cities as it relates to becoming a humane community for animals. The achievements have been plenty and the movement is so exciting!

We are only able to smile at the success of DCAP because of the dedicated people of Dallas. The passion, commitment and dedication to moving to a no-kill city is only because of YOU.

Everyday we are met with new obstacles (er...what new obstacles?) and everyday we have a champion to rise to the challenge (please ID your champion). Your dedication, compassion and commitment are what makes DCAP work, and there is nothing more then that to be grateful for.

On this day of being grateful, we, and the entire board of DCAP wish to applaud you for your efforts. It comes with a humble heart and a smile, you are the reason do (sp) many animals are alive.

Okay then, let's look at some of these so-called achievements Chris and Maeleska are crowing about.

The euthanasia rate is what the majority of us are concerned about - right? From a PDF housed at www.dallascityhall.com, here are the official figures from Dallas Animal Services:
Considering that the DAS intake for September 2012 was LOWER than in 2011, these figures are even worse than they initially appear.

Backing up to 2011, DCAP's Rebecca Poling (Miss Friendly Fire) stated that their goal was to make Dallas no-kill in five years. In over a year, they have accomplished very little. Most independent 501c3 rescues still find DAS impossible to work with, which is a major part of The No Kill Equation.

Posted by Feline Provocateur at 2:19 PM No comments:

Sorry to publish this so close to Thanksgiving.

From the HSUS Animal Sheltering magazine - you know, the one with the ads for euthanasia materials and classes* - an article telling us about DAS' wonderful relationships with local rescue groups:

At least DAS finally got something for the $50,000 they've given Wayne Pacelle and Co. over the years.


* An example ad from the online archive of Animal Killing Sheltering: 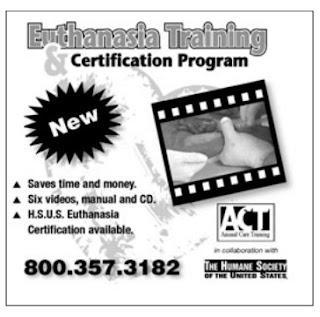 Posted by Feline Provocateur at 8:01 PM No comments:

Feline Provocateur
Dallas, Texas, United States
Standard Provocateur Disclaimer: If you have proof that anything I post here is incorrect or false, feel free to email your evidence or post a comment.

Some Interesting Links You Can Clicky